Author’s note: It’s #ThrowbackThursday here at An American Bluestocking, when I share earlier takes on books I think are worth your time. I originally wrote this review in January 2016; it was published on LibraryThing.

This book broke my heart.

One of the (few) encouraging things that seems to be coming out of our current deeply dysfunctional political process is growing bipartisan agreement that the United States is in desperate need of criminal justice reform. Politicians from both major parties are realizing that “mandatory minimum” sentencing laws, harsh solitary confinement practices, overly punitive punishment for juveniles who commit crimes, racial disparities in sentencing, overzealous prosecutions that ignore exculpatory evidence in order to secure conviction — all of these are having a profoundly negative effect on our 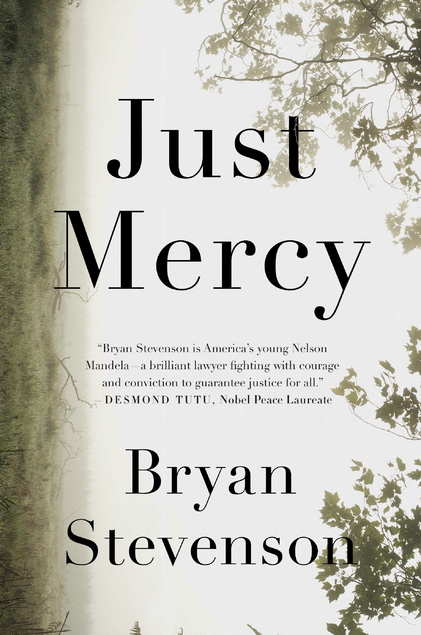 society. (A cynic might note that the recent Republican interest in providing treatment instead of prison for drug users only came once the opioid epidemic struck middle-class whites, but I digress).

All of these issues are explored by Bryan Stevenson in Just Mercy (Random House, 2014), subtitled “A Story of Justice and Redemption”. And it’s true, some of the people Stevenson and his organization, the Equal Justice Initiative, try to help do receive justice and some form of redemption, eventually. But it’s hard to feel triumphant about the outcomes when you read about how thoroughly their lives have been shattered before that justice is finally served.

Stevenson’s main focus is on Walter McMillian, a black man who has lived a largely blameless life in Alabama until he is arrested, tried, convicted and sentenced to death for the murder of a white teenager despite having been continuously in the company of more than 20 people at the time of the killing. The ways in which justice was mauled in

his initial trial are shocking and infuriating. It’s the sort of tale that would get rejected as completely unbelievable if someone wrote it as an episode of Law and Order. And yes, racism was absolutely a factor in his case, and in many aspects of EJI’s work. More than once, Stevenson himself is spoken to harshly by judges, bailiffs, law enforcement officers who don’t realize they are speaking to a black graduate of Harvard Law School and not just another black defendant. They are unable to see past the color of his skin, even when he is wearing a suit and sitting in a courtroom.

Of course innocent mistakes occur, but the accumulated insults and indignations caused by racial presumptions are destructive in ways that are hard to measure. Constantly being suspected, accused, watched, doubted, distrusted, presumed guilty, and even feared is a burden borne by people of color that can’t be understood or confronted without a deeper conversation about our history of racial injustice.

Interspersed with chapters about Stevenson’s attempts to win Walter a stay of execution, a new trial, or exoneration are explorations of other aspects of the ways in which the criminal justice system has failed. The EJI successfully argued before the Supreme Court that sentencing juveniles to death row or life in prison without parole is unconstitutional, first for non-homicide crimes and eventually for all crimes. They also advocated for the mentally ill and developmentally disabled, many of whom are sentenced to death or life in prison without even understanding what they have done.

Presenting a mix of cases and circumstances gave the book even more power for me. It’s easy to feel indignant about innocent people being executed or left to rot in jail. It’s harder to feel sympathy — and yes, mercy — for the guilty, but Stevenson’s powerful rhetoric made me understand the need for such compassion in a very personal way.

The power of just mercy is that it belongs to the undeserving. It’s when mercy is least expected that it’s most potent — strong enough to break the cycle of victimization and victimhood, retribution and the psychic harm and injuries that lead to aggression and violence, abuse of power, mass incarceration. I drove home broken and brokenhearted about Jimmy Dill. But I knew I would come back the next day. There was more work to do.